Four Years And Out? 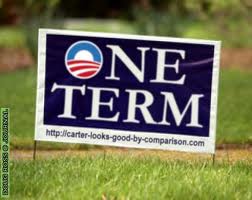 Two longtime political strategists have penned an op-ed this morning in the Washington Post calling on President Obama to declare that he will not seek re-election.

Such pontificating could be easily dismissed if it were written by Republican operatives — say, Karl Rove and Haley Barbour. But this piece was put out by two Democrats, Pat Caddell and Doug Schoen, who worked for presidents Carter and Clinton, respectively. Their argument is really quite simple:

If the president goes down the reelection road, we are guaranteed two years of political gridlock at a time when we can ill afford it. But by explicitly saying he will be a one-term president, Obama can deliver on his central campaign promise of 2008, draining the poison from our culture of polarization and ending the resentment and division that have eroded our national identity and common purpose.

I think their case is plausible. Do I expect Obama to take their advice? No. However, to the case against an Obama second-term, I would add that he doesn’t appear to enjoy being president very much.
If Obama were to go on his merry way in 2012 and hand the reins over to Hillary, he could be one of the greatest ex-presidents in history — one whom the passing of time would treat kindly, given the historic nature of his presidency and the impressive list of legislative accomplishments in his term in office. That list, by the way, might very well grow longer if he could throw off the partisan shackles by freeing himself from having to run again.
And I’m sure there are Democrats in Congress who would love to run for re-election themselves without having to say, “Barack who?” when asked about the depth of their support for the faltering president.
On the other hand, there would also be lots of Democrats who would resist such a move — either because they think Obama could accomplish more if he weren’t a lame duck or because they simply don’t want to give Republicans the satisfaction of having driven him from office.
And there is also the argument that Obama would be pulling a Sarah Palin. Yuk …
Be Sociable, Share!

2 Responses to Four Years And Out?