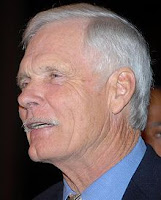 Ted Turner is at it again. In order to get a handle on anthropogenic global warming through population control, he wants the world to adopt a one-child policy, similar to the one they have in China.

And get this: among other things, he proposes a sort of cap-and-trade system for reproductive freedom:

Mr. Turner – a long-time advocate of population control – said the environmental stress on the Earth requires radical solutions, suggesting countries should follow China’s lead in instituting a one-child policy to reduce global population over time. He added that fertility rights could be sold so that poor people could profit from their decision not to reproduce.

My concerns with population growth have less to do with man-caused global warming – which I think has yet to be proved – but with the sheer logistical challenges of feeding 7 billion people (10 billion by 2050, we are told). Population growth is a major factor in the increasing use of the antibiotics and growth hormones that maximize productivity in farm animals but probably threaten our long-term health.

Indeed, if you want to really cut greenhouse gases, get rid of animal agriculture — not people. As I have written before on these pages, a 2006 United Nations report found that the meat and dairy industries produce more greenhouse gases than all the SUVs, cars, trucks, planes, and ships in the world combined. We’re talking mostly decaying animal waste and cow farts.

I sympathize with Turner’s goal of getting a handle on world population, although there are so many problems with a one-child policy that it will never happen. Enforcement would require a massive new police state and, here in the U.S., it would face so many court challenges that it couldn’t possibly enacted into law.

Plus, my understanding is that the U.S. birth rate is at historic lows anyway and that our net population growth of about 1% comes more from immigration and increased life expectancy that anything else. Besides, 80% of the world’s population growth over the next 40 years is expected to come from developing countries, most of which would resent wealthier nations telling them they should stop having so many babies.

But maybe poorer nations could persuaded to use birth control if we paid them off? Interesting idea anyway, Ted.

One Response to Turner Strikes Again