Tilting At Snow … And Windmills

If this ghastly snow keeps piling up, maybe we’ll look like this place on the Tug Hill Plateau.

Located between the Adirondacks and Lake Ontario, Tug Hill averages more than 200 inches of snow annually. Some of the older camps there actually have second-floor entrances for use in the winter

At an elevation of more than 2,000 feet, the plateau is also quite windy. Therefore, Tug Hill has become a haven for cross-country skiers, snowmobilers and … energy production. And with almost 200 turbines, The Maple Ridge Wind Farm is the largest such facility in the eastern U.S.

Even in this very remote area, the wind farm generated considerable opposition before it became operational five years ago. It reminded me that, for all its promise, “green energy” has a long way to go before it can become a serious player. 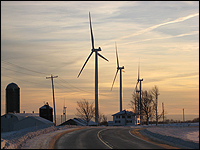 So, if the burning of fossil fuels should eventually be phased out because of greenhouse emissions and we want to avoid energy sprawl, what does that leave us with in terms of energy sources?

Nuclear power is where it leaves us, my friends. I know, I know. That’s not perfect either. But what other options do we really have? What source can provide us with the energy we need to power the world’s economy and not emit greenhouse gases or mar the landscape?

Now, if we can only muster the will to let it happen. Then again, maybe there is hope after all …

4 Responses to Tilting At Snow … And Windmills