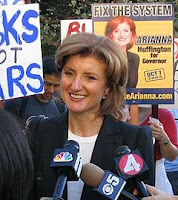 Thanks to Tom Dudchik for the Capitol Report link to the news that Georgia Gov. Nathan Deal is likely to sign a bill allowing for Sunday alcohol sales. That will leave only Connecticut and Indiana clinging to the Puritan-era ban on Sunday sales.

According to the AP article, most of the objections in Georgia are based on religion or on the presumption that Sunday sales will lead to increased consumption of booze. Here in the Nutmeg State, few people mention those concerns.

Instead, we are worried that a small group of business people (the state’s mom-and-pop package store owners) will be forced to open on Sunday and incur additional expenses that could bankrupt them. So the fierce lobby that looks out for the little package stores cries foul at the possible elimination of such blatant protectionism.

Also, I learned last night of the dumbest lawsuit ever. A group of bloggers who wrote for the Huffington Post on the condition that they do so only for exposure and not pay, has sued Arianna Huffington for … back pay.

As Jack Shafer says, we have become “a nation of Winklevosses” who are happy with an agreement until we see that there’s more money in the pit and want to a new deal.

If Jonathan Tasini, the lead plaintiff in the class action suit against HuffPo, had wanted to be paid, then he should have refused to write until he was compensated — or found another outlet for his writings that would pay him.

I myself used to write op-eds for the Lakeville Journal on a pro bono basis, which was fine until I felt I could no longer justify spending several hours on a column without getting paid. So I found a place that would compensate me for my time.

There. That wasn’t so hard, was it Mr. Tasini?


← In My ‘Sites’
Don’t Trust The Cops To Police Themselves →